single.php Why the Fujimini Adventure Series Is Great For Teaching Children About Asian Culture - ONCEKids
Get in Touch!
We are donating 50K new children´s books, help us deliver them to kids in need! We are social too: 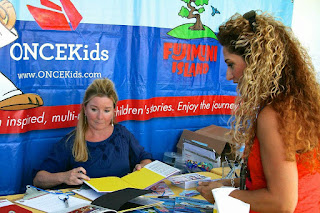 Eileen Wacker created her children’s book series, Fujimini Adventure Series, with a purpose in mind- to provide a series that was entertaining and educational for children but also to provide an avenue for children to learn about Asian cultures. During her time living in South Korea, she noticed a deficit in the availability of english language books that taught about Eastern culture and tradition. To remedy this situation, Wacker came up with the idea for her series, a collection of books with different plots but all with an Asian flare.

Each book introduces a new tradition, legend, or aspect of Asian culture to readers. Many of the books expose children to an Asian tradition that they may not have otherwise been exposed to.

In ‘Silent Samurai and the Magnificent Rescue’, children not only learn about samurai warriors but also fun facts like how purple is the color of royalty in Japan.

‘Blue Penguin and the Sensational Surf’ introduces a new character with a deep connection to Asian culture and legend, the Kappa. Not only is the Kappa very culturally significant, but it is also a unique addition to literature, especially children’s books.

‘Rainbow Panda and the Firecracker Fiasco’ follows the trend of all Wacker’s other stories by incorporating a very important Asian holiday into the plot. Children who read this book will learn all about Chinese New Year Celebrations and the importance of fireworks and firecrackers as a part of New Year celebrations.

‘Red Penguin and the Missing Sushi’ also introduces children to a new Asian holiday, the Moon Festival Celebration; a traditional Chinese harvest festival. In addition to introducing the holiday itself, the story also integrates many important features of the holiday, such as the food. Of course, Sushi, which can be guessed from the title, but some other foods as well, such as Moon Cakes! 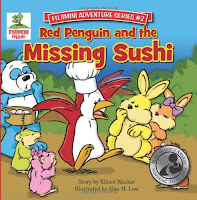 One of my favorite features about Eileen Wacker’s series that makes the books unique, other than the Asian theme, is the glossary that she has at the end of each story. This addition to each book provides a way for children to not only be introduced to an Asian tradition, holiday, or legend but to learn even more about it at the end of the story.

This book series provides a wonderful avenue to teach your children about other cultures and traditions while being fun, cute, and entertaining at the same time!