single.php Who Is Blippi, And Why Do Kids Love him? - ONCEKids
Get in Touch!
We are donating 50K new children´s books, help us deliver them to kids in need! We are social too:

Who Is Blippi, And Why Do Kids Love him?

Chances are, if you have a kid between the ages of 2 and 6, you’ve heard of Blippi. The bespectacled fellow who wears really bright colors, glasses and a bowtie? In the past few years, Blippi has become an icon in the kiddie-sphere. His videos have views in the billions, and he has millions of followers. But who is Blippi? That’s what most adults want to know.

WHO IS BLIPPI, AKA STEVIN JOHN?

Blippi is Stevin John, who has a background in brand development and online content creation. “My goal with Blippi was to bring positive emotions and memories to the act of learning,” he writes in the “About” section of the Blippi website. According to the Blippi website: “Stevin grew up in a small town where he was surrounded by tractors, cows, and horses!” If you’ve ever seen his videos, you know that much of his content revolves around construction equipment and other outdoor activities like visiting parks and farms.

WHAT DID BLIPPI DO BEFORE BLIPPI?

Before he went into the field of digital content creation, he was in the military. John is a former member of the United States Air Force, serving as a C-17 Loadmaster with the 4th Nuclear Airlift Squadron. After his service, he moved to Los Angeles to begin his career in the digital space. “I wanted to be a fighter pilot, but I soon started to realize the military wasn’t for me,” he explains to The Spinoff.

HOW DID BLIPPI GET STARTED?

So, how does a guy who was in the Air Force become one of the most popular children’s entertainers on the internet? It’s quite simple actually, Stevin John became an uncle. “When he was two years old I noticed my sister was using YouTube because it was free, but I started to see there just wasn’t any good quality children’s content on there,” he says. Noticing that there was a lack of content featuring things kids like, including tractors, animals, and diggers. And thus, he came up with the idea for Blippi. Wearing a costume sewed by his mom (including his signature blue and orange cap) he posted his first video as Blippi in January of 2014.

Blippi is more like the millennial (John was born in 1988, which makes him 31) answer to Mister Rogers than slick YouTube influencer. But that doesn’t mean he doesn’t know how to use the internet. His videos are more aligned with the wholesome educational content parents search for on YouTube. Kids will learn their colors while Blippi runs through an empty playground. His visits to a construction site has kids running around singing his “I’m an excavator” song for days.

‘It seems like the kids really enjoy me but the parents do too because they can keep their kids entertained with Blippi and they know it’s safe content that’s educational,” John said to The Daily Mail.

Perhaps you heard about Blippi because of the scandal. Before he became Blippi, Stevin John had a web presence as Steezy Grossman (he legally changed his name from Stephen Grossman to Stevin John.) Steezy Grossman made a truly gross video where he pooped on his friend. The video went viral of course, mostly because of reaction videos other people made while watching it. “At the time, I thought this sort of thing was funny, but really it was stupid and tasteless, and I regret having ever done it,” John said in a statement to BuzzFeed News.

Thankfully, the video has been taken down, so none of his young fans can’t accidentally find it. It is clear that John takes his role as an entertainer for kids very seriously. “Watching Blippi become part of children’s lives and so in turn in became a part of their families’ lives. Blippi is continuing to grow because these children really love Blippi, and now their parents are talking about it and spreading the love,” he says. “I believe that children are super smart and they have good intuition. I think they can tell that Blippi is genuine and I have fun doing what I do.” 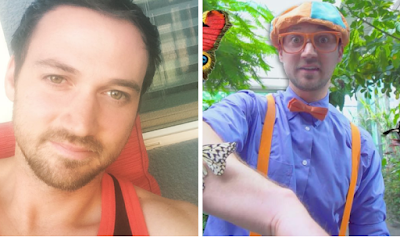 Some parents may not know this, but Blippi is a bit of a heartthrob. Moms all over the internet have commented on how handsome Stevin John is. But sorry folks, he’s got a girlfriend.

While Blippi has grown a lot in the five years since John started, there’s still so much he wants to do. Currently his videos are on YouTube, and he also self-publishes them on Amazon Prime video as well. Because of this, he has fans all over the world. Via his website, parents can buy Blippi merchandise, including a Blippi doll, DVDs, CDs, and apparel. As the brand has grown, he now employs a team to help him keep the ship sailing. He’s also working on adapting the videos into a live show, and producing a mostly animated show with Netflix. Then there’s the shoe deal with K-Swiss.