single.php Videogame Review: Crash Team Racing Nitro-Fueled - ONCEKids
Get in Touch!
We are donating 50K new children´s books, help us deliver them to kids in need! We are social too:

***WARNING: Some of the videogames I feature are rated T (teen) and M (mature). I celebrate the technology and the skillset — seriously — of these games. I respect that every family makes their own decisions for what games are played in their house.***

Crash Team Racing Nitro-Fueled feels as good today as the original did 20 years ago.

There was a danger Crash Team Racing Nitro-Fueled would show its 1999 progenitor up to be a dated game best left in the past. Instead, developer Beenox has proved how impressive and durable Naughty Dog’s original work was while also tweaking it in the right ways. The original game’s list of 18 tracks has been expanded upon with 13 more from its sequel, Crash Nitro Kart, and these provide an extended list of topographically and visually distinct circuits, from underwater tunnels to ice caves to desert pyramids. Those visuals have of course also been given a facelift, and while no track looks bad, some look especially stunning. Coco Park has gorgeous pink flowers strewn across the road, for example, while Tiger Temple looks like it was taken directly from Uncharted 4 and Electron Avenue feels like racing through Blade Runner’s vision of Los Angeles.

The handling takes a bit of getting used to, mind you. For anyone who’s played any amount of Mario Kart, for example, over the past few years, Crash Team Racing’s power slides will feel decidedly alien, at times too sensitive and at others not sensitive enough–and this leads to quite a few missed crates or headlong collisions with stationary objects. However, once you reacquaint yourself with the mechanic–which requires you to hold one bumper down to drift and press the other bumper with the correct timing to gain a boost–it reveals itself to be of greater depth than comparable turning methods in other kart racers. You can chain these boosts for even faster acceleration (but at the risk of spinning out), so while it’s harder to get to grips with, Crash Team Racing’s power sliding nets bigger rewards for those willing to dance with the drifting devil.

Nitro-Fueled’s array of power-ups are the other obstacles in your path to the finish line. They are derivative of Mario Kart’s selection–Crash’s green beakers are Mario’s bananas, Crash’s Aku Aku and Uka Uka are Mario’s Super Star, and so on–but, again, Crash Team Racing provides an interesting twist. Collecting Wumpa Fruit both speeds you up and turbocharges your power-ups. Green beakers transform into the more deadly red beakers, TNTs–which can be shaken off–become the instantly detonating Nitros, and so on. When the power-ups, boost pads, and handling combine, Nitro-Fueled boasts an exhilarating sense of speed.

These power-ups do, however, occasionally become frustrating during CTR’s Adventure mode, which tasks you with coming first in every single race across the original game’s tracklist, in addition to some optional challenges like beating certain times or collecting a certain number of crystals. Winning on every track is certainly manageable, barring a couple of trickier races, until you reach the boss fights, which feel a little unfair as bosses are quicker than any playable character and boast unlimited power-ups. Over time, after yet another run ruined by yet another bomb, it’s enough to make you want to turn off Adventure–though perhaps just until you’re back to craving that triumphant adrenaline rush the boss battles admittedly conjure.

In a welcome attempt to modernize the mode, Beenox has added a Nitro-Fueled variant of Adventure. This allows you to switch characters between races and adjust the difficulty, which goes a long way to resolving the campaign’s more irritating moments. If you prefer the more punishing, “authentic” method of progressing, you can do that too. Mercifully, the game autosaves after every race, though those giant green screens are still around if you fancy saving there for old time’s sake. (Incidentally, this is an attitude Beenox has applied to the game’s soundtrack, which allows you to switch between the revamped version and the original PlayStation audio–a nice touch.) Nitro-Fueled mode solves many of Adventure’s problems and so allows the campaign’s challenges, relics, and crystals to supply lone players an incentive to keep coming back. 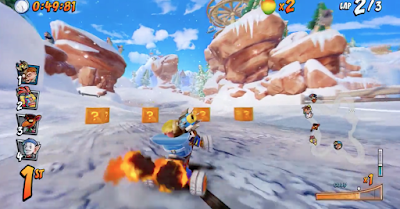 Outside of Adventure, there are of course the standard single races or cups, as well as an extensive Battle mode. Within this are varied game types such as Capture the Flag and a battle royale-style Last Kart Driving. These are fun, but the relative lack of players (a maximum of eight, including AI in local play) limits the chaos somewhat, so matches can sometimes feel a little lifeless. Following a day one patch, online races can readily be found and run smoother than before, however some lobbies still suffer from half a second of lag–you’ll sometimes find yourself blowing up just a split second before your bomb nemesis rolls into view.

As well as Adventure mode, character customization has also been modernized. As in the 1999 game, you can choose characters depending on your preference for higher top speed, quicker acceleration, or better handling. However, you can now also change your kart and character’s appearance, with a selection of skins, badges, paint jobs, outfits, and whole new karts and characters to choose from. These are unlocked through normal play, but can also be purchased with in-game currency via the store. While they are, mechanically speaking, meaningless, they add a nice bit of flavor–and some of the outfits are pretty cool. My favorites are Robo-Cortex and the adorable Fisherman Polar. Look at him! Look at him!

Simply put: This is a remaster done right. Nitro-Fueled maintains the spirit and rock-solid foundations of a childhood favorite while building on it and modernizing it where necessary–even if the handling might take a bit of getting used to. Adventure mode’s classic variant feels a little tough, but your first race on Roo’s Tubes or Sewer Speedway will bring a nostalgic grin to your face regardless. When the nostalgia fades, Crash Team Racing Nitro-Fueled remains fun and engaging enough to keep you racing on with a smile on your face for much longer yet. It’s good to have Crash back.