single.php The Puppy Trap - ONCEKids
Get in Touch!
We are donating 50K new children´s books, help us deliver them to kids in need! We are social too: 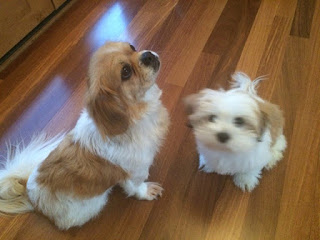 One moment of weakness and now I have a dog for twelve to fifteen years. I forgot how much work puppies are. We already have one dog, a Tibetan spaniel named Buster Brown. He is cute and basically a good dog but he caused quite a bit of damage to our house, namely to the rugs, floor and furniture. He runs away whenever he can and barks at us if we dare put him in his crate. At five years old, he has mellowed out and uses stealth tactics to accumulate privileges like sleeping in the kids’ beds and getting up on the furniture.

A few weeks ago, a friend of mine sent me a photo of her adorable new puppy. I commented on the cuteness. She sent me a text saying the breeder had a brother still left in the litter. I fell into the puppy trap and the next day we had a puppy. Not planned, not thought through, and honestly not a good idea. Puppies are naughty but get away with a lot because they are so irresistible. Our puppy Chewbacca (Chewie) is energetic, funny and brings immense joy. But Chewie is a destroying machine, like none I’ve come across.

He needs to be cleaned coming out of his soiled crate. He wants to play wildly. He chews up the puppy pad he is supposed to go to the bathroom on. He devours his little breakfast and races to Buster Brown’s bowl to steal his. He chews our rugs, table legs, shoes and socks. Every time I turn around the puppy is licking the wall. He barks at us. He runs at full speed and pounces on Buster over and over.

Ethan walks over. “Mom have you ever heard of animal rights groups? They are just kind of everywhere. I think you might want to read up…” Christian nods like he has a point.

I have no response for this.

My daughter Olivia comes in the kitchen and announces, “people start to resemble their dogs over time. It’s a fact. I saw it on the internet.” I say, “Thank goodness Chewie is so cute, it should be against the law.” She rolls her eyes at me. “How could being cute break any laws? Really mom? I’m just saying we should get him groomed a lot, just in case. Look at this picture of a Lhasa Apso with long hair. I can’t look like this! Please get on this.” I find myself nodding. The Lhasa Apso with hair all the way to the ground and a pony tail on its head is not a look anyone in my family could embrace.

I’m cleaning up yet another accident and I say to my son Ethan, “See what happens when you have a momentary lapse in judgment and give into temptation. Don’t do it.” He looks at me and says, “Wait a minute! Let me see if I have this straight. You’re saying if I can’t resist doing something, I’m going to end up with the cutest puppy ever? Good talk mom…”

I say, “That’s not what I meant” but somehow I can’t explain what I really meant. Do I deeply regret getting this puppy? Yes. Would I do it again? Yes.

I never wanted a dog in a thought-out kind of way. No one has ever called a dog ‘mom’s best friend’. A mom’s best friend may be a number of things depending on the mom. The best friend could be another mom, her husband, her sister, her child or a wine bottle after a hard day. It’s never a puppy. Because puppies wreck things with exuberance and rarely have remorse for chewing my shoes or sensing which rug is my favorite, only to ruin it. My daughter Natalie told me to pee on my favorite things and then clean them up with ‘puppy no’ spray. I would be marking my territory and the puppy would go somewhere else. She was sure she had seen that tip in an on-line training manual.

So for now, I am riding solo on the training committee. I will tell Chewie to stop being so wild. I will potty train him without using any human urine to mark territories. I will not give him the haircut I want so we look alike. He can have his own unique look. I will hold him and play with him when no one is home so no one thinks I’m soft on the puppy.

As the holidays approach, do something crazy. Get a puppy. You’ll regret it almost as much as you’ll be glad you did it.