single.php The Mom’s Code - Girlfriends and Girls Night Out: A Girls Night Out in Action (Part 2 of 5) - ONCEKids
Get in Touch!
We are donating 50K new children´s books, help us deliver them to kids in need! We are social too:

Women need to nourish their souls with Girls Night Out.

I have a wonderful support system but I’ve moved a lot so I have to continuously build new ones. My women friends are important but sometimes I’m so crazy busy, I beg off of dinners or cancel plans last minute. This is a mistake because there are always crises at home to tackle. I’ll never have an open space on the calendar. Although, GNO literally means Girls Night Out, for me it means bring myself out, take my ‘self’ on a date. Me, myself and I— all of us need to get out. I’m pretty fun when I’m not whirling around in some worry spiral. For those few precious hours, I’m not just a wife or mommy.

When I moved to Seoul, I left behind my support networks. I had lived in Denmark, France, Belgium and London as a young adult. I always had a purpose. I moved for school or for my jobs. Met my husband there. Got married. But this moving to Asia, as a trailing, non-working spouse with four children was very different.

The night before I left, my friends threw me a celebration dinner. My husband had been in Seoul for a month and a half while I prepared for the move. There were shots, passports, and six months worth of clothes, potentially needed medications and other school related things I was trying to assemble. My house was like the gong show and I was running through activities as if my life depended on it. I almost cancelled the dinner but I knew Lanie would bang on my door and insist I come out.

Usually, we teased Steph for ordering the scallops for the hundredth time. Lanie would drink one too many glasses of wine and flirt with our waiter.

But this night, two things were different. I was moving to Seoul, and Steph was convinced that her husband was cheating on her. She looked like she hadn’t eaten in two weeks. All the brightness from her flaming red hair and expressive green eyes was gone. No one knew what to say.

MOMS, WE WANT TO HEAR FROM YOU 🙂 DO YOU AGREE? DISAGREE? WANT TO SHARE SOME LOVE? IN THE COMMENTS BELOW, TELL US YOUR STORIES.

“I still can’t believe you’re moving to Korea! You’re the only person I’ve ever met to do this. It’s actually very crazy of you.” Nikki said. “You better come back!” She looked like a retired beauty queen— a blue-eyed brunette, dressed to the nines.

“Keep us posted on your every move,” said Lanie, shifting her lacy bra strap. “We’re going to live vicariously through you. We can’t wait to hear about the back alleys of Seoul!” Lanie attracted the attention of our waiter, who couldn’t keep his eyes off her. We’d have great service tonight.

“Are you going to get a housekeeper?” Nikki asked. “My neighbor, Eunjoo, says every well-off and expat family has a full-time housekeeper. I’m so jealous!”

“I guess but I read the lack of privacy is tough. And I’m not sure how Koreans feel about Americans. They always seem to be protesting against us,” I said.

“How about a driver? Do they allow foreign women to drive?” Audrey pushed. She thinks everyone should have as much help as possible.

“Yes, women can drive but the traffic is brutal and many of the signs are hard to understand or in Hangul. They don’t want expat wives on the road. And I read that sometimes locals target expats by staging accidents to get money. So a driver, Mr. Park, is part of the contract.”

“I’ll bet he’s gorgeous,” said Lanie. “I’m going to fantasize about him seducing you. You’ll find him irresistible. Or maybe he’s devious, an enemy among us, until he falls in love with you.” We were all laughing. 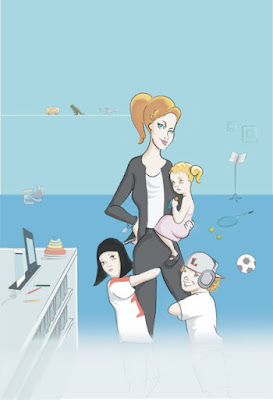 She continued. “And one day, his hand will brush your thigh as you step into your beautiful black sedan. Then you’ll stop wearing undies, so he can bend you over quickly every time the opportunity presents itself. OMG! I’m going to attack Brian later and make him wear a chauffeur’s cap! Don’t you dare tell me if Mr. Park is ugly or old!”

“I can’t believe you’ll have that much help. Does she do laundry and cook?” asked Nikki. “Maybe you can live the life of a pampered princess for a few years, living in an exotic country.” Nikki’s big brown eyes sparkle with her new eyelashes. Nikki keeps us all guessing as to how she keeps such a meticulous house. And one that always smells like wafer cookies.

“The housekeeper’s name is Mrs. Chun,” I said, “She’s worked with foreign families for 30 years so we’re lucky to have her. But you know me well enough to know I’ll be very hands-on with the kids. I hope Mr. Park and Mrs. Chun aren’t bored. And, I do want to drive sometimes. Not driving at all would be a loss of freedom for me.”

Audrey said, “Hmm. A princess living in an aquarium or six hours of driving, four loads of laundry, three meals that no one wants to eat, five hours of cleaning the house, every day… is there really an issue here?”

“But Mrs. Chun and Mr. Park will have it good too. When I die and come back to life, I either want to work for you, be your kid, or be your dog. You’re going to be too nice. I just know it,” said Nikki.

“Working for a foreigner is considered a really good job. Koreans don’t want to work for other Koreans. Apparently, they treat their help badly. The culture is extremely hierarchical.” They all looked at me, knowing I despise people-stacking. I said, “Well, that’s what I read, anyway.”

Nikki said. “One piece of advice: don’t start feeling guilty before Mrs. Chun even shows up! I’m terrible — I don’t want our cleaner to think I’m lazy, so I clean up before she comes. Cracks my husband up.”

Lanie grabbed my hand. “You’re going to love having a housekeeper and driver. Enjoy it!” She drummed her fingers on the table. “I’m sick of the guilt. I gained 42 pounds when I was pregnant with Katie. I felt terrible about myself, so I joined a gym. Then I felt terrible about leaving Katie in daycare while I was working out. Of course, Brian was his usual understanding self: ‘Wow, lucky you, getting to work out and do yoga in the middle of the day.’ Of course, I lost my temper and yelled, ‘I gained weight growing a person during the pregnancies, while you contributed a sperm that makes a pea look like Mount Everest, and I will never have the same shape again! If a mom has three kids, statistically, she has gained and lost, and maybe not, over 75 pounds and that’s if she gained the minimum! So don’t say a word about yoga or the gym or I’ll sew your mouth shut!’”

We all laughed hysterically. Other diners looked our way, some amused, others annoyed. I love Lanie. My friend, the yoga instructor, who has a bad temper. “Don’t worry about the battle,” she said. “The make up sex was awesome.”

Nikki laughed, “I hate the gym. I just need to get into my dress for my cousin’s wedding. That’s as far as my aspirations go. Thank goodness I can only go twice a week, since my meddler-in-law measures how often I leave the house.”

I said, “I know. For me it’s getting into my ski pants every year. Have to keep the weight creep to a minimum.”

Steph sighed loudly. We were waiting for a cue. I grabbed her hand. “So how are you? Do you want to talk? We’re so worried about you. You’re too skinny and look so sad.”

“I don’t want to be a downer. If I start to cry, I might not be able to stop,” Steph said. “It just keeps getting worse and worse.”

“Why do you think he’s cheating?” Nikki asked.

“I found a receipt for a restaurant he went to on a business trip to Boston. I asked him who he was with, and he said he ate alone at the bar. Really? You had steak for two and two bottles of wine by yourself? All he said was ‘I was really hungry,’ and left the room.”

“Where there’s smoke, there’s fire,” said Lanie, her blue eyes flashing dark. “So I surfed around and found his profile on a dating service for married men. He’s a dog, a chronically cheating, lying piece of shit. His profile’s still up!”

“He didn’t even come home last night,” Steph said. “He said his meeting ran late, so he spent the night at the Soho Grand. I don’t know what I’m going to do. He’s still pushing for sex constantly. Sometimes I give in because I want him to remember how much he loved me at one point.”

“Stop putting out!” I joked. But it’s partly true. I say gently, “His cheating is not a reflection of you or something you did; it’s a reflection of him. I think the sex is a power play. He feels like he has the upper hand right now.”

“You have to be smart, Steph,” Nikki said. “If he’s lying about this, he could be hiding money and lying about other things. You have to protect yourself and your kids.” Nikki is the most sensible and genuine of my friends. That night she was the model of a ‘hip mom’ with her bangle bracelets, hoop earrings, and cool boots.

Steph said, “He acts like the kids acting up is all my fault. That we owe him some perfectly quiet house to come home to. It’s like none of us is measuring up. I want shield the kids from his meanness and selfishness so I hound them to behave so Mitch doesn’t lock himself in his office when he gets home.”

I said, “Mitch is a bitch.Sorry just joking. You’re doing a great job. Save enough energy to keep your routine in place. Kids test boundaries when they are scared. They know something is wrong in the house. Keep the bedtimes and other limits you have set. Pour affection into them as they go to bed, even when they’ve been monsters so they sleep well.”

Steph nodded, “You’re right. I can do these things.”

The whole group continued laying out potential next steps for our sweet, utterly destroyed Steph. As we talked, I was struck by how much love and caring is in our group. I was also struck by the fact that my friend, who always looks so perfect on the outside, had pulled back the curtain for us. And behind it, there was mayhem and torment, and it just was not perfect at all.