single.php The Legend Behind Chinese Valentine's Day - ONCEKids
Get in Touch!
We are donating 50K new children´s books, help us deliver them to kids in need! We are social too:

The Legend Behind Chinese Valentine’s Day 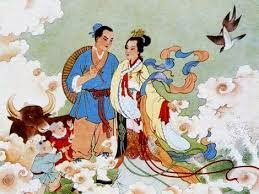 Unlike many other parts of the world, the Chinese celebrate love and relationships on a day other than the 14th of February. Their Valentine’s Day, known as Qi Qiao Jie or the Seventh Eve, occurs on the seventh day of the seventh month of the Chinese lunar calendar. Like many Chinese holidays, there is a long history and deep tradition behind the seventh day of the seventh month that makes it so significant, especially for couples. Other than the difference in the day that the Chinese Valentine’s Day occurs, there are differences in the gifts that are exchanged between couples. It is not as common to see flowers and chocolates exchanged between couples as it is in Western parts of the world, however there are still many romantic gestures and customs between loved ones on this day. In the past, colorful “shrines” made of paper, fresh fruit, and flowers are put up in as a tribute to the first two lovers of Qi Qiao Jie. As we see with many Chinese festivals and holidays,there are several legends which surround the origins of Chinese Valentine’s Day.

The first legend says that the seven daughters of the Goddess of Heaven caught the eye of a Cowherd during a visit to earth. The most beautiful daughter, the seventh born, caught the eye of the Cowherd, Niu Lang. Niu Lang decided to have a bit of fun by running off with the sisters’ clothing. The seventh daughter took it upon herself to ask for their clothing back. After, Niu Lang and the daughter, Zhi Nu, were married. The couple lived happily for several years, but eventually the Goddess of Heaven missed her daughter and demanded she return to heaven. Despite her demand of a return, she took pity on the heart broken couple, and allowed them to be reunited once a year, the seventh night of the seventh moon. 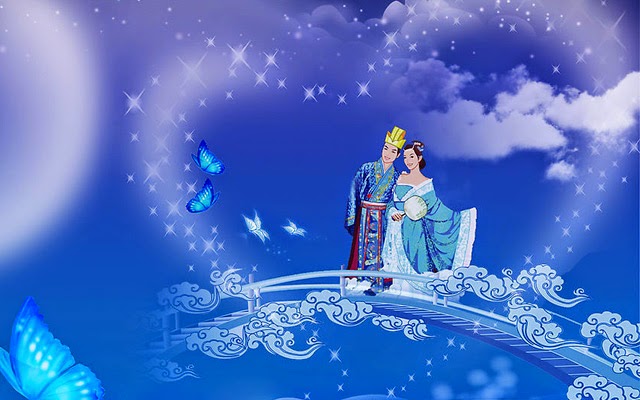 To commemorate the holiday, many lovers lie together and gaze at the star Vega, east of the Milky Way, a tradition that comes from another one of the legends that created Qiao Jie. This particular legend says that Niu Lang and Zhi Nu were fairies that lived on opposite sides of the Milky Way. They were quite lonely and the Jade Emperor of Heaven felt sorry for them, so he attempted to bring them together. Nui Lang and Zhi Nu became so love sick for one another that they spent every moment together and began to neglect their work. The Jade Emperor became annoyed at this, so he made a new law that the couple could only be together for one day of the year- the seventh night of the seventh moon.