single.php My Review of Eileen Wacker's 'Black Tortoise and the Dynasty Dragon' - ONCEKids
Get in Touch!
We are donating 50K new children´s books, help us deliver them to kids in need! We are social too: 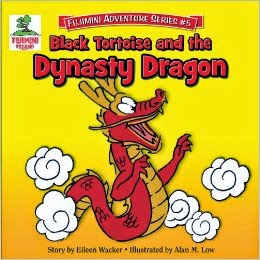 In Eileen Wacker’s fifth addition of the Fujimini Adventure Series, the animals of Fujimini Island notice a mysterious Turtle Boat on the shores of the island. The Black Tortoise, one of the Samurai Warriors, is visiting the island with a special mission- but what exactly is his mission? Orange Bunny listens in on a conversation between Black Tortoise and Brown Hamster to try and figure out what is going on. Do you ever listen in on other people’s conversations or spy on others? Orange Bunny overhears that the Black Tortoise is looking for the legendary Dynasty Dragon. Orange Bunny panics and jumps to conclusions that the Samurai are trying to kidnap the Dynasty Dragon so she launches a special mission to try and save him. Will Orange Bunny and her friends on Fujimini Island save the Dynasty Dragon or has Orange Bunny made a big mistake?

One of my favorite features of the Fujimini Adventure series, is how in each book Wacker introduces a subtle but important lesson that can be taken away from the reading. Underneath the silliness and fun of each story lies a message that is very relevant to kids and growing up. In Black Tortoise and the Dynasty Dragon, this message is what can happen when you listen in on others’ conversations, spy on people and make assumptions. In addition to the lesson, Wacker also introduces some fun new characters, like the Dynasty Dragon, and some new terminology, like a Turtle Boat. So not only do little readers learn lessons that are relevant to their daily lives, they also learn some new stuff that are a part of other people’s lives and cultures as well.

The cute and creative story about not making assumptions, working as a team, and the depth of a mother’s love has been rated 5 out of 5 stars on Amazon and Barnes and Noble.

To learn more or purchase this book, click here