single.php How the Japanese Celebrate Legends of the Milky Way During the Annual Star Festival - ONCEKids
Get in Touch!
We are donating 50K new children´s books, help us deliver them to kids in need! We are social too: 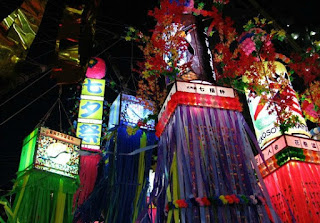 Each year on the seventh day of the seventh month, Japanese people all over the country gather together for what is called Tanabata, or the Star Festival.

The Japanese festival originates from a traditional Chinese festival known as the Qixi Festival. It is purposed to celebrate the meeting of the deities Orihime and Hikoboshi, who are represented by the stars Vega and Altair. The annual holiday is filled with traditions and rich cultural celebrations, beginning on July 7th.

Today, people celebrate this day by writing goals and wishes on small pieces of paper and hanging them on decorated bamboo. The various decorations and bamboo sticks are then set afloat on a river or burned after the festivities have concluded. This traditional Japanese custom is similar to Obon traditions, where people place floating paper ships and candles in rivers. There is a range of customs celebrated in Japan today for the Star Festival, depending on the region. In addition to the bamboo sticks, common decorations that can be seen during the holiday are colorful streamers, casting nets called Toami, and Kinchaku bags. The streamers are said to symbolize the “weaving of threads”, the casting net is to bring good luck to farmers and fishermen, and the Kinchaku bag symbolizes wealth.The festival’s origins can be traced back to the legend of the Cowherd Star (Altair) as well as the Weaver Star (or Vega). The stars were said to be separated by the milky way and only permitted to meet one a year, on the seventh day of the seventh month. Another legend behind the holiday is the tale of Kikkoden, which dates back over 2,000 years ago. The legend says that there was a weaver princess named Orihime and a cow herder prince named Hikoboshi. They fell so deeply in love and were so distracted by one another’s presence that they began neglecting their jobs. The king was so furious that he used the Milky Way to separate them, only allowing them to meet once a year on the seventh day of the seventh month.