single.php Gaming: Team Sonic Racing – 5 Awesome Features You Need To Know About - ONCEKids
Get in Touch!
We are donating 50K new children´s books, help us deliver them to kids in need! We are social too:

Sumo Digital are returning with their third Sonic kart racing title, but with Team Sonic Racing, they’re mixing things up quite a bit. New elements are being introduced, new mechanics are going to be in play, while several ones from the older games are being dropped, as Team Sonic Racing looks to craft a new style of kart racing experience. As we look ahead to its launch on May 21st, in this feature, we’ll be taking a look at fifteen things you need to know about the game.

Why this focus on classes, though? Well, in a big shake-up to the formula, Team Sonic Racing is putting great emphasis on co-op play. Players will be part of a team of racers, who must work together to perform better. Paying attention to the performance and actions of your teammates will be key, while mechanics such as sharing power ups with team members will also come into play.

So what’s the composition of the races in light of this focus on co-op? Each race will see twelve competitors in total, who’ll be divided into four teams of three. Any character can be in any team, while players can also choose to have three of a single character being in a single team as well- though of course, given the focus on classes and co-op play, that might not be ideal in most situations.

Here’s another way Team Sonic Racing is setting itself apart from other kart racers, which also ties in with its focus on co-op racing. Races in Team Sonic Racing won’t be won on the basis of your positioning, but rather your team’s total points. As such, working together and performing well as a team will be key to victory. 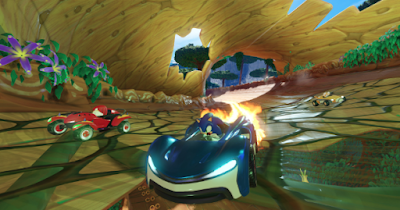 Sega and Sumo Digital have looked at quite a few games to serve as inspirations for the co-op-based gameplay of Team Sonic Racing. For starters, the idea came to them from Sonic Heroes, whose team-centric gameplay was used as a point of reference. Meanwhile, the developers have also cited the likes of Splatoon and Overwatch as inspirations.

Unlike Sonic & All-Stars Racing Transformed, which also allowed players to take control of boats and planes, Sonic Team Racing will focus on cars, and cars only. The developers say they have done so because they felt having vehicles other than cars didn’t fit with the game’s team-based gameplay, which is something that they wanted to emphasize a lot. 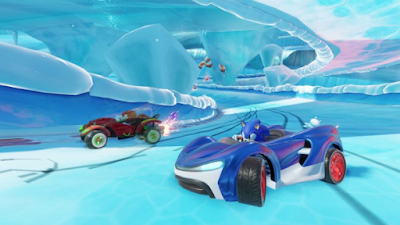