single.php Disney's Bizaardvark: Survival Tips for Set Parents (Part 6 of 6) - Set Crybabies - ONCEKids
Get in Touch!
We are donating 50K new children´s books, help us deliver them to kids in need! We are social too:

Here is a big secret. Everybody cries on set at some point – every child actor and every set parent. So, at some point you will cry. Yes, big sloppy tears will fall down your face. All the pressure, angst, and emotions build up and then an incident sets the water works in motion. For me, always at least once a season, and usually twice I’ll sob and look like a big fat crybaby. I’m not talking about ‘acting’ crying either, I’m talking about full-on distress-triggered sobbing. It’s actually very human and makes the set more personal.

In my case, one crying episode usually involves missing something for one of my other kids which triggers massive, uncontrollable mom guilt. Last summer, my older son, who is working an ESPN internship in Utah, was feeling quite ill. He went to Urgent Care and they tried to send him home, but he insisted something was wrong. He was diagnosed with acute appendicitis. He got himself to the hospital and had to undergo an emergency appendectomy. I was on facetime with him feeling powerless, worried and massively stressed. My sister, a nursing PhD, was on the phone with him, advising him. Since I was not there, he went through this alone and woke up alone. I was inconsolable but trying to appear ‘normal’. The sacrifice at that moment was crystal clear. My son went through a surgery alone; I was on the phone with him as he anxiously made his decision (really no decision to make). He was scared and he wanted his mom and all he got was a facetime phone call. My husband was at work back in Honolulu. In that moment, I felt like the worst mom on the planet. The next day, since the surgery was over, I stayed in LA and went to set as usual. I must have looked like a wreck because the AD asked me if I was okay. I stood there unable to answer as tears started leaking out. The leak turned into a flood; I could not stop crying. The cast parents and show runners could not have been nicer and it was truly genuine. Multiple people offered to watch Ethan and keep him overnight if I wanted to fly to Utah.

Has anything like this ever happened to you – where you felt like, despite your best efforts, you were a terrible mom?

The other inevitable crying episode will involve something about the show. One time, one of the set crew made a comment that my son was not listening to the female guest director’s (who was actually our dialogue coach) instructions and notes to make adjustments in a scene. She said that this was a big moment for the guest director, and that we needed more female directors! I should step in and tell him to do a better job. That ‘everyone’ expected more as he is a strong actor. I felt like someone kicked me in the stomach. My mind went there immediately – he probably was not listening enough! Earlier in the day, he had a huge chemistry honors midterm and the warehouse fire alarm would not stop going off. His castmate was having a really rough day so he had to leave the school room and take this massively hard (and timed) test in a dressing room sitting on the floor with loud clanging noises going off repeatedly. I went in search of my son ready to criticize him. I was so stressed and upset; I was envisioning everyone talking about how disrespectful my son was to a female director (who was also our show’s dialogue coach). When I found him, he had a bloody nose, a huge physical indicator of his stress level. I felt overwhelmed but didn’t have the heart to say anything as he stood there trying to halt the bloody nose and not bleed on wardrobe’s shirt. I hugged him instead.

I walked to crafty to make myself a a cup of tea and yes, those dreaded tears pushed their way out. I was trying to hurry and get back to the safety of Ethan’s dressing room where I could cry alone. The executive producer walked by and was very alarmed to find me in tears. I told him what happened, and he said, “That is not true at all. He’s doing a fantastic job in the episode. That was inappropriate. If I saw anything like this happening, I would talk to Ethan myself. Ridiculous. Let me handle it.” He was very angry which made me less upset. Someone had my kid’s back. ‘Everyone’ was not talking about Ethan at all. Of course, I told the set parents who are my friends and we all collectively agreed (as a pack of mama bears) that sometimes balancing everything on set is really tough and we have to be the ones that remember that our kids are just that, kids.

New cast members and new set parents tend to cry the most. So, go on rookies, have a good cry. I’m not advocating for fake crying or manipulative crying! But a real, true cry is cleansing, and it makes us all human.

This dovetails into my last point. Production can’t care about your schedule. Your family trips, friend’s birthday parties, major life events, spring breaks, academic peaks and testing have to be invisible. If they happen during the shooting season, you and your child are not going. The show/series has to be shot as budgeted. It’s a business. But despite this fact, production will still care about your child and strive to protect their emotional well-being. And they will absolutely care when you (or your child) cry. 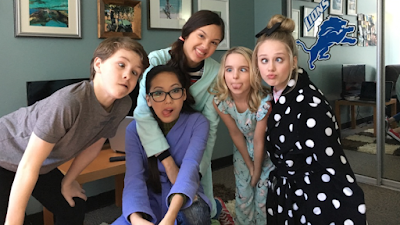 Thanks for coming back again to read the blogs! More tips and insights forthcoming on balancing academics. Have a great week.