single.php Disney Training For the DMV - ONCEKids
Get in Touch!
We are donating 50K new children´s books, help us deliver them to kids in need! We are social too:

Disney Training For the DMV 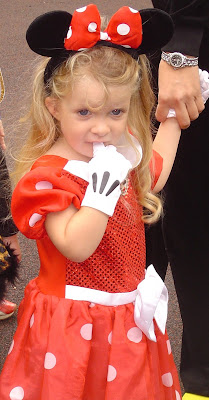 Yesterday I took my son to get his driving permit at the DMV. There was no school for him due to a teacher development day. The other three still had school so I was up by 6:00 to make breakfast and drive them. My kids are never all in school for five days in a given week. Days off for kids = work for a tired mom as my day becomes filled with randomness. Schedules are security blankets for moms.

I wanted to get to the DMV as it opened. Going to the DMV is a mom chore. I don’t want to go. It’s the opposite of a happy place. It’s filled with scowling people who torment moms who like things fast, efficient, and friendly. As a mom, I prefer people who smile big and welcome me with extra chirpy voices. That’s why I love Disney. Disney workers are my definition of cheerful. Although I admit I yelled at my kids in the happiest place on the planet. They were acting horrible—fighting and begging to buy big souvenirs that I had to lug around the entire park. And all the giant items ended up lost or thrown away within a week.

If I can become impatient in Disneyland, I knew the DMV posed a serious challenge to keep any good mood going.

Watching my teenage son put on his socks was painful. And tying his sneakers in slow motion was worse. I had to leave the room. As we were driving, my son confessed that he has not studied the manual. He insisted since he listened in the Drivers Ed class, he should be fine. “It’s all common sense anyway. That’s what Colin told me,” he said confidently. I said, “This is an example of being lulled into the dummie circle.” The dummie circle is when kids reinforce each other’s teenage notions, which we adults can plainly see are not going to work out for them.

When we arrived, we were told that one of our forms is a copy and not accepted. I showed how we have everything the website indicated we needed and brought his new passport as back up. I pointed to the sign on the wall that lists the accepted ID forms. The DMV employee said the sign was old and I needed another form. She did not accept his passport as proof of identity because he is not eighteen. I tried to use humor so she’d like me and I wouldn’t have to go all the way home for an additional form. I said, “We just got this passport and you are all the same government, just different departments. How can the passport not be a form of ID? Passports are the ultimate form of ID.” I didn’t make a new friend. I think the DMV training program includes instructions on how to transition from scowling to displaying apathy and back.

We went home to retrieve the form and headed back. The same employee played her role as a mom tormentor, inspecting every form again and called her supervisor over to inspect them as well. After four hours of waiting in four different lines, my son failed the test. I snapped at him, “Now I have to come back here. I don’t have time for this. If you don’t do well in school, this might be where you end up!” As the words flew out, I regretted them. They sounded snobby. He looked at me, “Mom, I’m just saying, there are some positive things about working here. There doesn’t appear to be a dress code. I hate dress codes. And the people don’t seem to work too hard.” I kept my mouth shut, liking the person he is.

He wasn’t really upset about not passing, either. He said, “I just need to get five more right next time. Hey, can Colin come over and shoot some hoops?” Since Colin’s mom was at work this means I’m picking up and dropping off and making or buying lunch. I said yes because that’s how we’re wired as moms. Saying no and having him sit on his Xbox all day is definitely a worse option. As we got out of the car, he said with a smile, “Thanks mom. That was fun hanging out with you.” And there it was; he gave me my Disney moment.

This morning, I woke up to randomly strewn eyelashes all over my pillow. I pulled out the eyelashes that I paid to put on. I didn’t deliberately do it and I only pulled them off of one eye. It’s how I know the stress is getting big. My little girl came into my room and said, “Mom, I think I should stay home today and play with the puppy. I need to train him. You can have a day off from taking care of Chewie. Wait, what happened to your eyes? Your face doesn’t match.”

I hugged her and said, “Today you go to school. Next Wednesday is Veteran’s Day and there is no school. Another four day week. I’m sure we’ll think of some fun stuff to do. Meanwhile give me five minutes to make my face match.” Then, I started the day pulling the rest of the eyelashes out. This is why I need a little more Disney in my days.