single.php Comedian Jason Good Puts Together a Hilarious List of the Differences Between Raising Your First and Second Kid - ONCEKids
Get in Touch!
We are donating 50K new children´s books, help us deliver them to kids in need! We are social too: 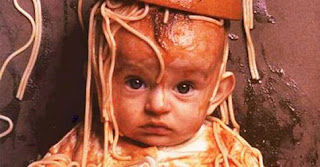 Anyone who has had more than one child can vouch for how differently their approach is to the second child versus the first. Every first time parent admits to being a perfectionist and perhaps just a little uptight when it came to their new baby’s food, clothes, room, and so on. But by the time a second child comes along who really cares…just kidding. But parents have definitely learned a thing or two from the first time around and what is important, so often times the second child is approached with a slightly different, little less uptight attitude! Comedian Jason Good sums it up perfectly with a funny, exaggerated list featured in his book “This is Ridiculous, This is Amazing”.

2. BedFirst kid: Crib that Daddy put together himself while Mommy yelled at him.Second kid: Mommy’s bed. Daddy now has his own room with a mattress on the floor surrounded by dirty socks.

3. ClothesFirst kid: One hundred percent organic cotton. Some even made of bamboo? Second kid: His brother’s old clothes.

4. PartiesFirst kid: In our backyard with a piñata hanging from the Japanese maple.Second kid: Pizza on the floor.

6. Nighttime routineFirst kid: Swaddled in a Miracle Blanket. “Baby Beluga” sung to him. Asleep by 7:30pm.Second kid: Falls asleep on the sofa with mom’s breast in his mouth at 10:30pm.

8. ToysFirst kid: All handmade out of wood. Mostly Swedish.Second kid: The boxes his brother’s toys came out of.

9. ShoesFirst kid: Something European with an umlaut in its name.Second kid: Old muddy shoes with faded umlaut and missing sole insert.

10. Potty trainingFirst kid: Diapers, then some kind of training underwear, then underwear.Second kid: Might wear a diaper till college.

11. BabysitterFirst kid: A wonderful woman named Sarah, whom he loves and will cherish for the rest of his life.

Second kid: Doesn’t have one. We never go out.