single.php 5 Easy Boardgames for your Game Night - ONCEKids
Get in Touch!
We are donating 50K new children´s books, help us deliver them to kids in need! We are social too:

5 Easy Boardgames for your Game Night

For most of us, learning a new board game is the least exciting part of game night. Rulebooks can be overwhelming, and just because you’ve read the rules cover to cover doesn’t mean you fully grasp the game.That’s why board games that are easy-to-learn can be a breath of fresh air. And while the cardinal sin of game night will always be opening a game for the first time and reading the rules aloud to your glassy-eyed friends, there are several games that can be learned in ten minutes or fewer.

If you’ve ever wanted to feel like a professional code-breaker, this is the perfect game for you.At a glance, Decrypto, designed by Thomas Dagenais-Lespérance, appears to share a lot with the hit word game Codenames. There are two teams of players, with one player from each team giving clues to guide their teammates in picking the right words. However, the similarities end there.Players are divided into two teams, each of which has a screen with their four secret words. Simultaneously, one player from each team draws a code card with a series of three numbers from 1 to 4 that indicates the exact order in which their team must choose their secret words. Then, they give three clues to guide their team to guess the right words in the right order.Here’s the twist: the opposing team is taking notes on the other team’s clues, and they get a chance to crack the code first. Early in the game, they will have little idea of what the other team’s secret words are. But over time, patterns will emerge in the clues and one team might successfully crack the code.This head-to-head game of codebreaking is fun whether it’s played for keeps or for laughs, and it’s great with a big crowd.

Arguably the game that started the current trend of Tetris-like titles, Uwe Rosenberg’s Patchwork is the perfect example of “easy to learn, hard to master.”Each player works to create their own quilt by purchasing differently shaped tiles using buttons, the game’s currency. The tiles are placed randomly in a circle on the table, and a pawn is placed at one point on the ring. On your turn, you may purchase any of the three tiles clockwise from the pawn. This leads to simple yet agonizing decisions as you must consider not only how a tile fits in your quilt but also what tiles your opponent will be able to acquire on their turn.Because there is no randomness aside from the initial setup, this can be a battle of wits—or if you prefer, you can play more casually as you admire your growing quilt. This is a two-player game with plenty of depth that is easy to play over and over. 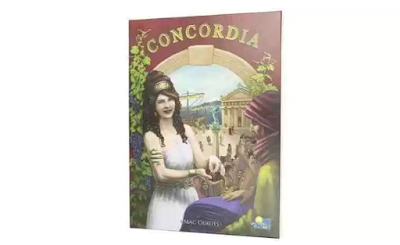 Designed by Mac Gerdts, Concordia puts players in the roles of leaders of Roman dynasties as they vie for various trade routes and commodities in ancient Rome.A glance at the board may give you an impression that you’re in for a half-hour rules explanation, but I can teach you most of the rules right now:Players earn points in a variety of ways, including constructing buildings in different cities, earning money, and obtaining colonists. You are given a hand of starting cards, and you can purchase more cards throughout the game. Each card does two things: it allows you to perform an action, and it scores you points at the end of the game for a certain category. By purchasing more cards with specific scoring conditions, you can control the way you play and earn points. On your turn, play a card and do what it says. Once you have played a card, you cannot play it again until you choose to pick up all of your cards. That’s it!The result, however, is a cunning game that is full of difficult choices and a variety of strategies. There are many ways to play this quintessential eurogame of trading and settling in ancient Rome.